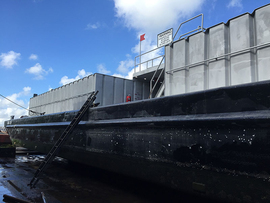 McDonough Marine Service is pleased to announce the acquisition of the marine assets of Liquid Mud Barges, Incorporated. Located in Houma, LA, Liquid Mud Barges have been a premier provider of barges for the transportation of non-hazardous oilfield mud to the oilfield industry for the past 25 years. The acquisition consisted of 13 – 130’ x 34’ x 7’ U.S. Coast Guard Certified liquid mud tank barges. Each barge has 4 independent deck tanks capable of holding a total of 2314 barrels of liquid mud. The barges are outfitted with an internal piping system capable of offloading cargo at remote locations.

Commenting on the acquisition, Pat Stant, President of McDonough Marine Service stated: “These barges will be a great complement to our current barge fleet servicing the oilfield drilling market. The liquid mud barges will complete the drilling rig barge package by combining deck and shale barges at the drilling location.”

McDonough Marine Service is one of the largest independent deck and spud barge chartering companies in the United States. The company was founded in 1945 and is headquartered in New Orleans, Louisiana.

Please provide us with some information so that we can serve you better.
Enter the information below and click submit.